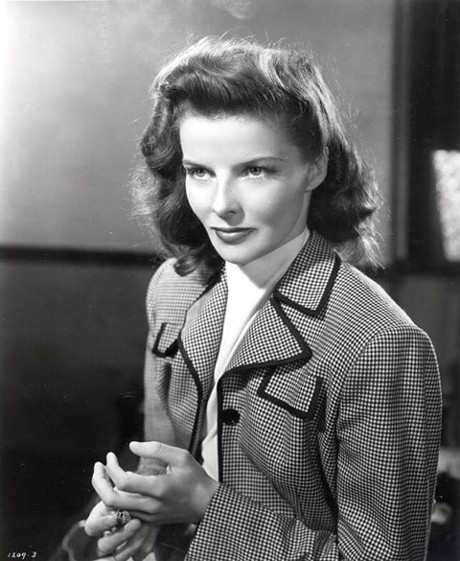 Publicity still of Katharine Hepburn in the 1942 film Woman of the Year.

Katharine Hepburn (1907–2003) the American actress, and one of Hollywood’s leading ladies for more than 60 years, receiving four Academy Awards.

Although there is no real evidence to suggest that one of Howard Hughes leading ladies had OCD, Hughes was once reported to have said “that, for a woman who takes 18 showers a day, she was in no position to ridicule his obsessions!” which seems to have been enough for many to comment she suffered with Obsessive-Compulsive Disorder.

It’s also reported that during filming of the 1973 film, A Delicate Balance, shot in an empty Victorian house near Crystal Palace, provoked the following anecdote. On the set, there had been no running water, a fact that prevented Hepburn from taking her constant showers. So one day, during a break in shooting, she walked down the street and knocked on someone’s door. A woman came to the front of the house. “Excuse me,” said Hepburn, “we’re filming in the house up the road, but there is no running water. I wondered if I could take a shower in your bathroom.” After that, the astonished woman, who recognised the star, allowed her to use her bathroom every day during the shoot.

Whilst of course we can’t say she didn’t suffer with OCD, we’ve found no real evidence to support the theory Hepburn suffered with OCD. Both anecdotes may have actually been referring to the fact Hepburn swore by cold showers for maintaining her health and great skin, she claimed that it was her number one beauty secret.

So for now, we don’t believe there is any evidence to support the theory that Katharine Hepburn suffered with OCD.