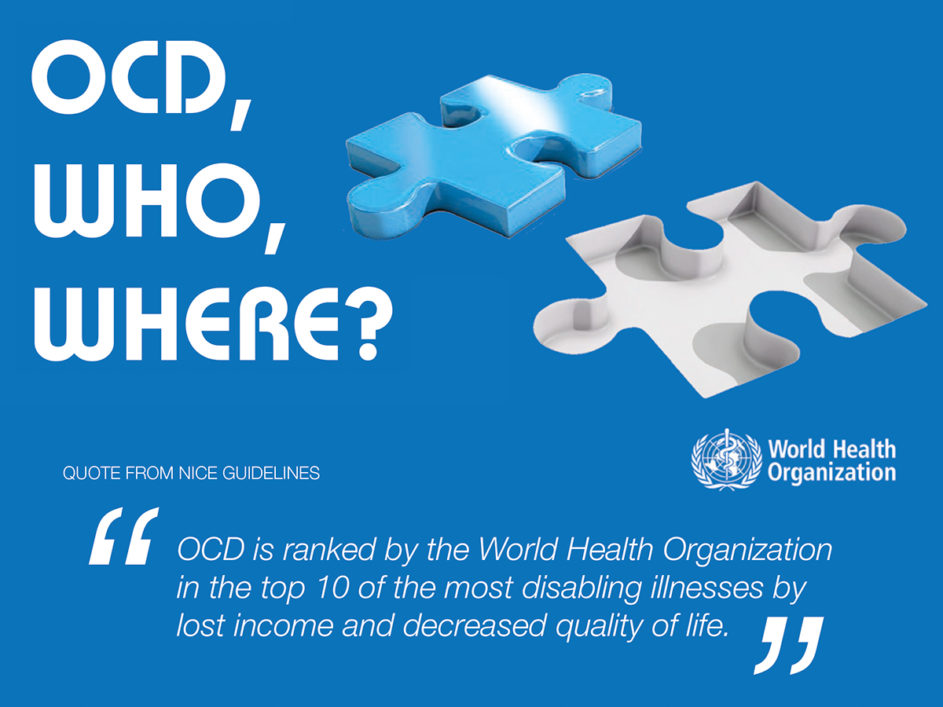 This article was first published in the OCD-UK members magazine (June 2017), and published online June 2018.

We have all seen the above World Health Organization reference to OCD, but where did it originate? OCD-UK investigated…

It’s virtually impossible to read a feature about OCD without the accompanying quote from the World Health Organization (WHO) which states that OCD is amongst the top ten most disabling illnesses. To be fair, we are equally guilty of using that quote to try and highlight the severity of the illness, not that any of our readers will need to be educated on that fact!

The quoted text (large text above) is used in virtually every OCD text book and website. It was also used in the NICE Guidelines back in 2006, but when someone asked me about the origins of the WHO quote we actually had to search for it, and search, and really, really search.

When the World Health Organization did not have anything searchable via their own website and Google failed to produce the answer, we started doing a little bit of digging. After much searching, we finally started to track down the trail of references. So here is what we found…

The NICE guidelines referred to a 2001 paper, the ‘Quality of life and disability in patients with obsessive-compulsive disorder’ (J. Bobes, 2001) which reported:

OCD ranks tenth in the World Bank’s and WHO’s ten leading causes of disability and, in the case of women aged 15–44 years, OCD occupies the fifth position.

So we pulled the Bobes article and checked the source of the above text, which was the World Health Organization’s, ‘The “newly defined” burden of mental problems. Fact Sheets nº217. Geneva: WHO;’ (1999). That fact sheet reported:

It is also of great significance that 5 of the 10 leading causes of disability worldwide (major depression, schizophrenia, bipolar disorders, alcohol use, obsessive compulsive disorders) are mental problems. They are as relevant in developing countries as they are in industrialised societies. 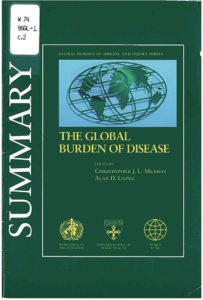 The Global Burden of Disease

We then accessed a copy of the fact sheet and finally located the original source of  that frequently referred to WHO quote. The source in question was ‘The Global Burden of Disease – A comprehensive assessment of mortality and disability from diseases, injuries, and risk factors in 1990 and projected to 2020‘ (Christopher J. L. Murray, 1996)

Published in 1996, the first thing that struck us was that it was using data from 1990, which is 27 years ago. However, the 1996 publication makes for interesting reading, it reports:

The burdens of mental illnesses, such as depression, alcohol dependence and schizophrenia, have been seriously underestimated by traditional approaches that take account only of deaths and not disability. While psychiatric conditions are responsible for little more than one per cent of deaths, they account for almost 11 per cent of disease burden worldwide.

Most significantly, the study suggested that the burden of psychiatric conditions had been heavily underestimated. Of the ten leading causes of disability worldwide in 1990, measured in years lived with a disability, five were psychiatric conditions: unipolar depression, alcohol use, bipolar affective disorder (manic depression) schizophrenia and Obsessive-Compulsive Disorder (see table below). 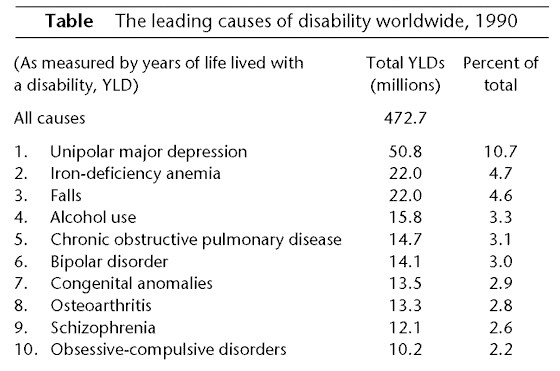 The report goes on to state:

Although in infancy and early childhood, girls and boys suffer from broadly similar health problems, striking sex differences emerge in adults. Poor reproductive health is far from being women’s sole concern. In both developing and developed regions, depression is women’s leading cause of disease burden. In developing regions, suicide is the fourth. Thus, while programmes to reduce the unacceptably high burden of poor reproductive health must remain a high priority for years to come, women’s psychological health also deserves much more attention. 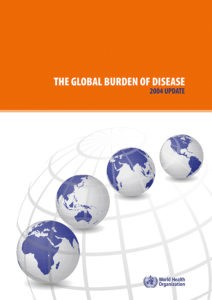 But of course that was 1990, almost thirty years ago, since then the WHO have published other reports, like the ‘Global Burden of Disease, 2004 Update‘ published in 2008. OCD is listed and classified in the publication under ‘neuropsychiatric disorders’, where it is listed fifth amongst the most disabling burden of mental health conditions. Within this it suggested that there is a slightly bigger impact on women than on men, 5,104,000 cases globally (2,909,000 females and 2,195,000 males). (Table A2: Burden of disease in DALYs by cause, sex and income group in WHO regions 2004).

Interestingly, OCD is no longer included in any top ten list of disability in these subsequent updates from the World Health Organization. Which of course is something to be welcomed, but why is that?

Why is OCD no longer listed highly in the leading causes of disability?
Firstly, we have a better understanding of Obsessive-Compulsive  Disorder than in the 90s and secondly, as mentioned previously, the prevalence of OCD back in the 90s was overestimated. This is possibly the reason why OCD is no longer listed in the study’s leading ‘prevalence of moderate and severe disability’.

Something we did pick up on which does warrant further investigation is the fact that there are no deaths reported for OCD in the publication. Sadly we know  of occasions where OCD has  caused loss of life,  thankfully such occasions are rare.

So why are no deaths reported for OCD?
We believe this is because in reporting the data, only a primary cause of death was recorded. So for example, where someone’s taken their own life (because of OCD), suicide is recorded, but not the reason for suicide (i.e. OCD).

In a new 2017 publication, the World Health Organization’s ‘Depression and other common mental disorders’ report, they list anxiety disorders are listed as the sixth largest contributor to non-fatal health loss globally, and appears in the top 10 causes of YLD (years lost to disability) in all WHO regions.  In this report, OCD was included with the ‘anxiety disorders’ category. The report states that the prevalence of anxiety disorders was 4.2% of the UK population would be affected by anxiety disorders (2,557,430 people).

Summary:
So there you go, for those that asked about that famous World Health Organization quote, we hope we have explained its origins.  Upon reflection, our website and other publications now need changing to…

OCD was once ranked by the World Health Organization in the top 10 of the most disabling illnesses by lost income and decreased quality of life.OCD-UK

But, we can now also state that…

The good news is that since the 90s, we have seen significant advancements in awareness, understanding and the treatment of Obsessive-Compulsive Disorder, and with the right help, the right support and lots of work, OCD need no longer be a burden.