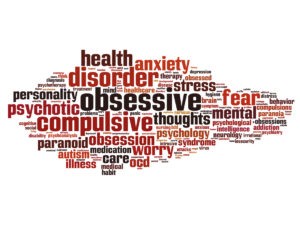 Obsessive-Compulsive Disorder (OCD) is clinically classified but we’re often asked if we consider OCD a mental health problem, so we thought it might be helpful to try and summarise how we classify and refer to OCD and the language that we use.

It is worth thinking about what a mental illness is and what the term ‘mental health’ means.

Mental illness – any of various disorders in which a person’s thoughts, emotions, or behaviour are so abnormal as to cause suffering to himself, herself, or other people.Collins English Dictionary

Mental illness is a condition, which causes serious disorder in a person’s behaviour or thinking, so of course OCD can and does fit within this descriptive. The Collins English Dictionary defines mental illness as “any of various disorders in which a person’s thoughts, emotions, or behaviour are so abnormal as to cause suffering to himself, herself, or other people.”

However, it’s important to remember everybody has ‘mental health’, which  is defined as “a person’s condition with regard to their psychological and emotional well-being.” So whilst we all have mental health,  it’s estimated that 1 in 4 people will at some point have a problem with their mental health, so there really is no reason to feel you can’t refer to OCD as a mental health problem. Ultimately, it’s important to use the phrase that you feel most comfortable with.

Whilst for some people receiving the label of OCD is important, for others the label of OCD or mental illness feels unhelpful. But it’s important to understand that having the ‘label’ can be useful  in helping us access appropriate treatment, and rejecting diagnosis or treatment appointments won’t help us if  OCD becomes more of a significant problem.

Some people  fear the label attached to mental health problems, and we’re frequently asked about how such a label (OCD) may affect their or their loved ones future employment prospects. Whilst this is an understandable concern, we generally advise people not to let a future potential problem (which is not yet a problem, and may never become a problem) prevent them from seeking treatment for something  that does exist in the here and now.  We  encourage people to focus on the problem they have today,  OCD and do all they can to get access to treatment,  to make sure  OCD doesn’t actually prevent them working in the future anyway.

So whilst it’s important to remember everybody has ‘mental health’, hopefully in the case of those of us with OCD our mental health problem is a treatable one, and that with the right support regaining our mental health remains a realistic proposition.