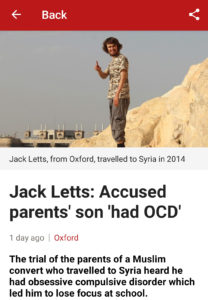 During the past week the trial of the parents of a Muslim convert (Jack Letts) suspected of joining Islamic State has been taking place at the Old Bailey in London. The parents, John Letts and wife Sally Lane, stand accused of funding terrorism by sending or attempting to send him money.

The court case generated plenty of coverage last week, and is likely to do so when it resumes. Whilst the full facts about the case and their sons involvement in the Islamic State are yet to emerge, we are concerned about the irresponsible journalism speculating that the accused’s son suffered with Obsessive Compulsive Disorder (OCD).

The BBC reported with the headline (as the image shows) ‘Accused parents’ son had OCD’, which we believe has no relevance to the story or what the parents are actually accused of. Such sensationalist and irresponsible headlines about OCD will only add to the misunderstanding that the general public have about the condition.

With so much misinformation about OCD already in the public domain we want to ensure factual reporting of OCD, and in such cases, most importantly, how OCD can impact on an individual. In all the of the reporting around this case, whilst the OCD link is widely reported none of the references to OCD have explained what impact that was likely to have had on Letts, which is why the headline that Letts had OCD is irresponsible, and most-likely irrelevant to his alleged involvement with the Islamic State and alleged desire to kill that the BBC have previously reported.

Another report in the Guardian quotes the mother telling a friend: “I still can’t quite believe he’s been so utterly stupid. I can only think that his mental illness (OCD) was deeper than we thought.”

It’s worth us highlighting the fact that OCD does not predispose people to commit violence, in fact usually the opposite, people with OCD who fear harming someone would go to great lengths to avoid doing so, and would certainly not actively wish harm on someone. Such unhelpful reporting and misrepresentation about OCD is irresponsible and harmful to almost 1-million law-abiding, non-violent and wonderful individuals who live with OCD each and every day.

Many people suffering with OCD are rightly concerned that press coverage around the reporting of this case. We also highlighted similar failures and irresponsible referencing to OCD and the man guilty of murdering the MP Jo Cox in 2016.

During the next few weeks we will be writing to the BBC and other media outlets to ask them to report on OCD appropriately, and offer out assistance with any future reporting.

We will also be reviewing if we believe the BBC have breached their own editorial guidelines and their regulators code of conduct by the use of this headline, and if necessary we will be making a formal complaint to Ofcom.