A response to the Wall Street Journal article written by our chief executive Ashley Fulwood and our children and parents lead Zoe Wilson, both have lived experience of OCD.
Updated: 3rd April 2020. 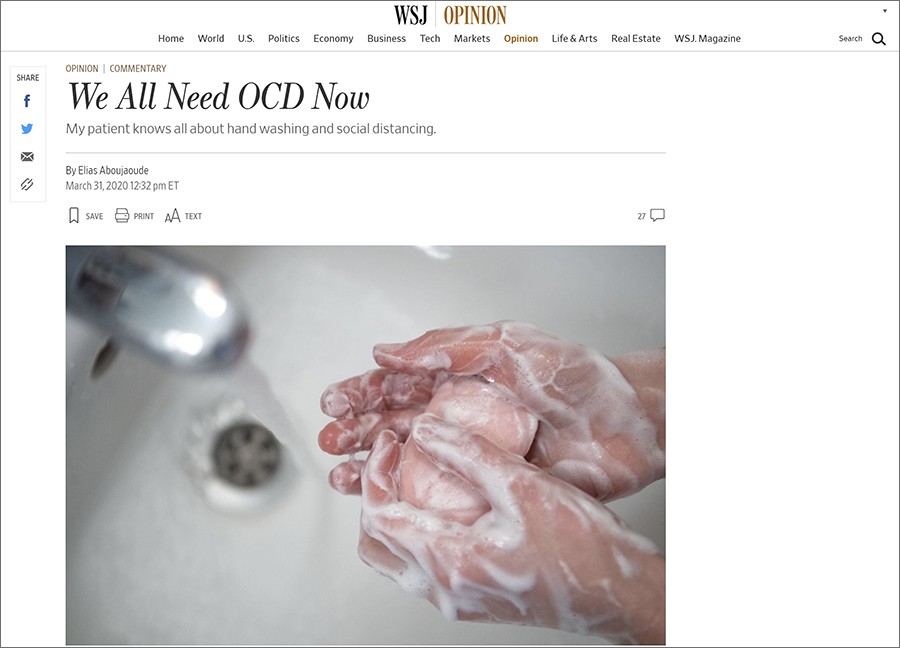 We’ve seen some horrendous journalism about OCD over the years, but this article published by The Wall Street Journal on Tuesday (31st March) is arguably the worst we have come across in 15-years of OCD-UK’s existence.

When the headline ‘We all need OCD now’ popped up on our screens we became instantly sceptical, however we reserved judgement for a few seconds because we know that sometimes great articles can be ruined by uneducated sub-editors who come up with a classless headline for clickbait.  So we stumped up the £1 to get beyond the paywall, more in hope than expectation.

The frustration we felt from the headline turned into anger as we read the full article. You see the work of the OCD-UK team is not just a job for us, it’s a commitment, it’s a passion, it’s life because we have all been where most of you reading this are, we have suffered with Obsessive-Compulsive Disorder.

So let’s not beat around the bush, the headline is drivel, the article is drivel.

We have reached out to the WSJ to ask them to review the content, we will update this page should they reply.

But for the benefit of any Wall Street Journal editor reading this and not understanding why this is such drivel allow us to explain:

We All Need OCD Now

It’s absolutely ridiculous to suggest the entire population needs OCD during this coronavirus outbreak, or at any time! OCD impacts on a person’s ability to function, so the population being asked to wash their hands for 20 seconds a couple times a day really doesn’t impact on their functioning.

Long after the hand washing and long after this pandemic, people with OCD that is centred around contamination worries will still be feeling ‘compelled’ by unwanted intrusive thoughts to wash their hands and 20 seconds will become 20 minutes, which will become 2 hours or more.  So in response we say to the Wall Street Journal, no, nobody needs OCD ever!

Of course such a claim is written by somebody who thinks OCD is just about hand washing, it really isn’t, the NICE Guidelines report that only around 26.5% of people with OCD will engage in cleaning or washing rituals.

So dear Wall Street Journal, would your readers want OCD that left them plagued by horrific intrusive thoughts or images about their loved ones dying from COVID-19 because they weren’t  careful enough?  Those constant unwavering horrific intrusive thoughts and images of loved ones dying and the crushing guilt that accompany them.  That’s real OCD.

OCD takes many forms, and every single form it takes is equally horrific. So no Wall Street Journal, we don’t all need OCD right now.

The article goes on to state…

OCD is no longer only something we have. It’s something we’re under county, state and public-health authorities’ orders to become.

We would argue that OCD is not even something we have, it’s something we ‘suffer’ from, and the difference is important and seemingly something the article author doesn’t fully grasp the subtle difference.

And for the reasons stated above, no, the public health authorities have not ordered us to ‘become OCD’, they have ordered us to keep our distance from other households and wash our hands for 20-seconds after being in contact with others, short term.  Neither of those things would get anywhere near the threshold for a clinical diagnosis of Obsessive-Compulsive Disorder.

Which brings us nicely to the authors next comment which demonstrates a total lack of education around OCD.

Social-distancing and hand-washing guidelines often are heeded improperly or only briefly before “OCD fatigue” sets in and caution is abandoned.

If only it was that easy for those of us with OCD to simply abandon the rituals when ‘OCD fatigue’ sets in!!!  OCD is not even about caution, it’s driven by intense ‘feelings’ caused by the horrors of the intrusive thoughts that plague a person to believe something terrible might happen if they don’t complete their rituals. Washing your hands for 20 seconds during a pandemic is rational and recommended, but OCD doesn’t serve logic, once that intrusive thought is triggered we are compelled to complete that ritual, even if it takes us hours, ‘OCD fatigue’ or not.

Evolution preserved a lifesaving anxious trait for us to tap into when needed. To use it right, we can look to people like my patient for discipline and inspiration. A little OCD, right now, wouldn’t be so bad.

Now you could be forgiven thinking that this journalistic masterpiece was written by some uneducated journalist looking for clickbait material, but as the quote above highlights, this was written by a clinical professor of psychiatry at Stanford!

A psychiatrist who, if this article is to be believed, seems to think that suffering from OCD wouldn’t be so bad and that somehow what we go through is a positive that people should aspire to.

To quote a real OCD expert (Salkovskis), when it comes to OCD rituals, “the solution becomes the problem”.  That’s a difference we hoped a clinical professor of psychiatry at Stanford would have understood.

People with OCD are inspirational, but not in the way the author describes, they are inspirational for the way they try to live their life the best they can despite the suffering they go through day-after-day from the horrendous intrusive thoughts and debilitating rituals that plague them. That is courage, that is inspirational.

Why is this response important?

Whilst we don’t think the psychiatrist meant any malice, his comments which the Wall Street Journal allowed to be published on their platform are incredibly damaging for every single person alive that suffers with Obsessive-Compulsive Disorder today and for those in the future.

The comments perpetuate misconceptions that OCD is just about hand washing, and even then it fails to recognise that hand washing for those with OCD is not just a behaviour, but is fear and worry driven that remain long after the washing has stopped.

This article fuels misunderstanding and stigma for those with OCD, that is why it’s damaging and why it’s important we challenge it, and challenge the Wall Street Journal for publishing it.

For our part we will also be writing to the American Psychiatric Association to ask them to review the comments by the Stanford based psychiatrist, which in our opinion fall short of professional standards.  Those failures erode 15-years of work that OCD-UK have undertaken to break stigma and educate people around the realities of Obsessive-Compulsive Disorder. A copy of that open letter to the APA can be downloaded here.

Our work to educate will continue, we don’t need health professionals undermining that work.