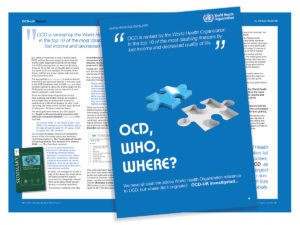 We’ve looked at the individual impact of OCD, but the social and economic impact of OCD should not be underestimated either.

In fact, as mentioned earlier, in 1990 the World Health Organisation (WHO) ranked OCD in the top ten of the most disabling illnesses of any kind, in terms of lost earnings and diminished quality of life. .   The same report also suggested OCD was the fifth leading cause of disease burden for women aged 15-44 in the developed world.

In a new 2017 publication, the World Health Organization (WHO)’s ‘Depression and other common mental disorders’ report, list anxiety disorders as the sixth largest contributor to non-fatal health loss globally, and appears in the top 10 causes of YLD (years lost to disability) in all WHO regions.

OCD  presents a considerable burden to the individual, their family, health services, and on society as a whole. The total cost accrued as a result of OCD is difficult to measure because it extends beyond treatment settings, but the NICE guidelines referred   to one report  which estimated that, on average, a person with OCD loses  3 years of  income over their lifetime.  If an OCD sufferer incurs losses of £483.04 for every week they are absent, this  amounts to a total loss of £75,354 due to unemployment over this 3-year period, not including lost opportunities for career advancement and the cost to families and carers over their respective working lifetimes.

Obsessive-Compulsive Disorder, compared with other anxiety related disorders is associated with more marked social and work related occupational impairment. One US report suggested that the economic impact of OCD in the US was an estimated $8.4 billion in 1990, 5.7% of the estimated $147.8 billion cost of all mental illness, and 18.0% of the costs of all anxiety disorders, estimated to be $46.6 billion. The indirect costs of OCD, reflecting lost productivity of individuals suffering from the disorder, were estimated at $6.2 billion.

70 million days are lost from work each year in the UK due to mental health problems, making it the leading cause of sickness absence.

The Centre for Mental Health found that in 2010 the total economic cost of mental illness in the UK was a staggering £105.2 billion, of which anxiety disorders, including OCD, cost £9.8 billion a year, that figure includes the costs of health and social care for people with mental health problems, lost output in the economy, for example from sickness absence and unemployment, and the human costs of reduced quality of life. In fact 70 million days are lost from work each year in the UK due to mental health problems, making it the leading cause of sickness absence.

The long-term social and economic costs are still likely to be greatly underestimated but this highlights the importance of providing early intervention and the highest quality of care and treatment for people with OCD, which is likely to be economically, not to mention morally, a much more cost effective solution to the social and economic impact of OCD.

The impact of OCD
The history of OCD
Page information
Last Checked: 5th June 2018
Next Review Due: December 2020