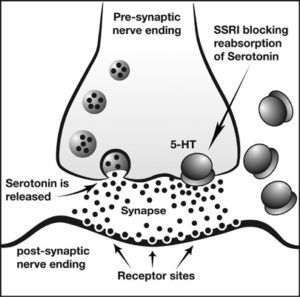 We do not know exactly why or how  Selective Serotonin Re-uptake Inhibitor  help some people with OCD.

Serotonin is a neurotransmitter, a brain messenger chemical that carries signals between nerve cells in the brain and is thought to be involved in regulating many functions, influencing emotions, mood, memory and sleep.

It’s thought that selective serotonin reuptake inhibitor (SSRIs) medications work by altering and increasing the balance of serotonin levels in the brain.  However, it is too simplistic to say that Obsessive-Compulsive Disorder is caused by low serotonin levels, but for reasons we still don’t understand, an increase in serotonin levels can improve symptoms for some people with OCD and make people more responsive to psychological treatments, such as CBT.

But how do SSRI’s actually work?

The brain is made up of millions of interconnected brain cells (neurons). Messages travel along these cells rather like electricity down a wire, but when the message reaches the end of the neuron, it has to jump the gap (synapse) to the next cell or group of cells.  To do this the neuron releases tiny amounts of a neurotransmitter into the gap. Serotonin is one of these neurotransmitters.

After carrying a message, serotonin is usually reabsorbed by the nerve cells (known as “reuptake”). It’s thought that SSRIs work by blocking (“inhibiting”) reuptake, meaning more serotonin is available to pass further messages between nearby nerve cells. 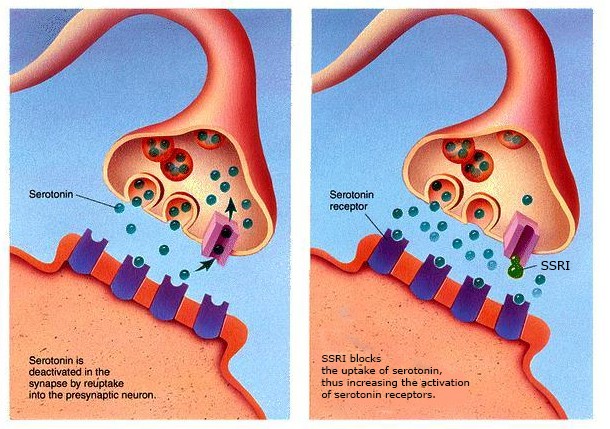 The job of your nerve cells is to send messages back and forth like a telephone wire. But nerves aren’t a single string —  they’re made of lots of interconnected cells. So they act more like the game telephone, where one person whispers a message to the next, and it’s passed down to the end of the line one person at a time. Instead of words, the ‘message’ is passed by chemicals called neurotransmitters that are sent by one cell to the next in line.

A key gene for this process is hSERT which has the instructions for making a serotonin transporter. The transporter’s job is to sop up extra serotonin after a nerve spits it toward the next nerve cell in line. In some people it’s thought hSERT might works too fast, and may collect all the serotonin before the next cell has  heard the signal.  To put it simply, their nerve cells are whispering when they should be speaking out loud.

In order to allow the nerve to recover and receive the next message,  the body has a clever way of removing the neurotransmitter from the receptors, and allowing it to be taken back into the originating nerve (re-uptake).

The SSRIs slow down the collection of serotonin by transporters like hSERT and the process of returning the serotonin to the end of the neuron it comes from. This is thought to mean that serotonin stays in the space between the cells longer and increases the chances that the second cell will get the message.

We still don’t know exactly what the influences of serotonin are on OCD, and some people’s symptoms are not improved despite taking SSRIs.  So sadly at this time taking medication might help, but can’t be assured, which is why we very much encourage people to focus their treatment on psychological therapy like Cognitive Behavioural Therapy (CBT).