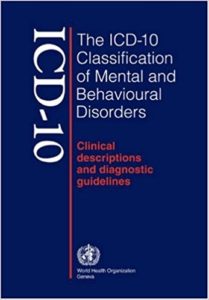 The International Classification of Diseases (ICD) is the international standard diagnostic classification for all recognised diseases and related health problems and is mainly used in the UK and Europe. ICD codes are alphanumeric designations given to every diagnosis and description of symptoms on medical records. These classifications are developed and monitored by the World Health Organization (WHO)  for the incidence and prevalence of diseases and other health problems.

The ICD is revised periodically and is currently in its tenth edition, the ICD-10, as it is known, was developed in 1992 and came into use in WHO Member States as from 1994. The ICD is currently under revision and the release date for the 11th Revision of the International Classification of Diseases (ICD-11) is planned for publication later in 2018.

On this page we will try and summarise what the ICD manual says about OCD and under which category they list it.  We will list both the existing ICD-10 and the draft version of the ICD-11, however please note the ICD-11 listings are still draft and subject to change before publication.

ICD-10
OCD-UK Note: At present the International Classification of Diseases (ICD) currently lists OCD in its own subcategory under the category of Neurotic, Stress-related and Somatoform Disorders alongside other anxiety disorders, all of which sits inside the mental and behavioural disorders category.

This is how each of those top two tier categories are listed:

So OCD is listed under F40-F48 – Neurotic, stress-related and somatoform disorders (F40-F48), a category which includes:

With regard to the essential features of OCD, the ICD-10 manual (2016) states the following diagnostic criteria for Obsessive-Compulsive Disorder.

(Code: F42) Obsessive-compulsive disorder
The essential feature is recurrent obsessional thoughts or compulsive acts. Obsessional thoughts are ideas, images, or impulses that enter the patient’s mind again and again in a stereotyped form. They are almost invariably distressing and the patient often tries, unsuccessfully, to resist them. They are, however, recognized as his or her own thoughts, even though they are involuntary and often repugnant. Compulsive acts or rituals are stereotyped behaviours that are repeated again and again. They are not inherently enjoyable, nor do they result in the completion of inherently useful tasks. Their function is to prevent some objectively unlikely event, often involving harm to or caused by the patient, which he or she fears might otherwise occur. Usually, this behaviour is recognized by the patient as pointless or ineffectual and repeated attempts are made to resist. Anxiety is almost invariably present. If compulsive acts are resisted the anxiety gets worse.

F42.0 Predominantly obsessional thoughts or ruminations
These may take the form of ideas, mental images, or impulses to act, which are nearly always distressing to the subject. Sometimes the ideas are an indecisive, endless consideration of alternatives, associated with an inability to make trivial but necessary decisions in day-to-day living. The relationship between obsessional ruminations and depression is particularly close and a diagnosis of obsessive-compulsive disorder should be preferred only if ruminations arise or persist in the absence of a depressive episode.

F42.1 Predominantly compulsive acts [obsessional rituals]
The majority of compulsive acts are concerned with cleaning (particularly handwashing), repeated checking to ensure that a potentially dangerous situation has not been allowed to develop, or orderliness and tidiness. Underlying the overt behaviour is a fear, usually of danger either to or caused by the patient, and the ritual is an ineffectual or symbolic attempt to avert that danger.

ICD-11 (Draft)
OCD-UK Note:The ICD is currently under revision and the release date for the 11th Revision of the International Classification of Diseases (ICD-11) is planned for publication later in 2018. The current listings are the present draft, however please note the ICD-11 listings are still draft and subject to change before publication.

At present the draft lists OCD in its own subcategory under the category of Obsessive-compulsive or related disorders alongside other anxiety disorders, all of which sits inside the Mental, behavioural or neurodevelopmental disorders category.

This is how each of those top two tier categories are listed:

Description: Mental, behavioural and neurodevelopmental disorders are syndromes characterized by clinically significant disturbance in an individual’s cognition, emotional regulation, or behaviour that reflects a dysfunction in the psychological, biological, or developmental processes that underlie mental and behavioural functioning. These disturbances are usually associated with distress or impairment in personal, family, social, educational, occupational, or other important areas of functioning.

So OCD is listed under – Obsessive-compulsive or related disorders (F42), a category which includes:

Description
Obsessive-compulsive and related disorders is a group of disorders characterized by repetitive thoughts and behaviours that are believed to share similarities in etiology and key diagnostic validators. Cognitive phenomena such as obsessions, intrusive thoughts and preoccupations are central to a subset of these conditions (i.e., obsessive-compulsive disorder, body dysmorphic disorder, hypochondriasis, and olfactory reference disorder) and are accompanied by related repetitive behaviours. Hoarding Disorder is not associated with intrusive unwanted thoughts but rather is characterized by a compulsive need to accumulate possessions and distress related to discarding them. Also included in the grouping are body-focused repetitive behaviour disorders, which are primarily characterized by recurrent and habitual actions directed at the integument (e.g., hair-pulling, skin-picking) and lack a prominent cognitive aspect. The symptoms result in significant distress or significant impairment in personal, family, social, educational, occupational, or other important areas of functioning.

(Code: 6B20) Obsessive-compulsive disorder
Obsessive-Compulsive Disorder is characterized by the presence of persistent obsessions or compulsions, or most commonly both. Obsessions are repetitive and persistent thoughts, images, or impulses/urges that are intrusive, unwanted, and are commonly associated with anxiety. The individual attempts to ignore or suppress obsessions or to neutralize them by performing compulsions. Compulsions are repetitive behaviors including repetitive mental acts that the individual feels driven to perform in response to an obsession, according to rigid rules, or to achieve a sense of ‘completeness’. In order for obsessive-compulsive disorder to be diagnosed, obsessions and compulsions must be time consuming (e.g., taking more than an hour per day), and result in significant distress or significant impairment in personal, family, social, educational, occupational or other important areas of functioning.

(Code: 6B20.0) Obsessive-compulsive disorder with fair to good insight
All definitional requirements of obsessive-compulsive disorder are met. Much of the time, the individual is able to entertain the possibility that his or her disorder-specific beliefs may not be true and is willing to accept an alternative explanation for his or her experience. At circumscribed times (e.g., when highly anxious), the individual may demonstrate no insight.

(Code: 6B20.1) Obsessive-compulsive disorder with poor to absent insight
All definitional requirements of obsessive-compulsive disorder are met. Most or all of the time, the individual is convinced that the disorder-specific beliefs are true and cannot accept an alternative explanation for their experience. The lack of insight exhibited by the individual does not vary markedly as a function of anxiety level.