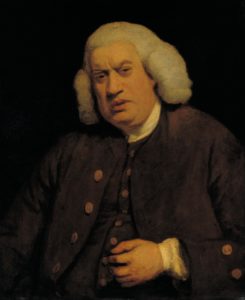 Dr. Samuel Johnson (1709–1784), born in Lichfield, Staffordshire, was a writer who made lasting contributions to English literature as a poet, moralist, literary critic, biographer, editor and lexicographer and was accredited with compiling the first dictionary of the English language. He was also a devout Anglican and it’s reported that he suffered from a compulsion of ‘odd movements’ as described by a friend, writing some 225 years ago. There are also many accounts of Johnson suffering from bouts of depression and what Johnson thought might be ‘madness’. It’s also been widely accepted that the posthumous diagnosis of Tourette syndrome was likely.

In James Boswell’s 1791 book The Life of Samuel Johnson, Boswell claims that Johnson wrote in 1777 that, “When I survey my past life I discover nothing but a barren waste of time, with some disorders of body and disturbances of the mind very near to madness.” 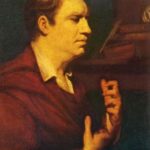 Johnson would perform highly ritualised movements and antics when passing over the threshold of a door. Just before crossing the threshold, he would whirl, twist, make highly ritualised hand motions and then jump over the threshold in a long leap. He would never step on cracks between paving stones and it’s also reported that he always counted the steps when walking up and down the stairway. When he went for a walk, he touched every post he passed and if he missed one whilst talking with a companion he would need to go back to touch it before he could continue, all of which we would today most likely consider examples of OCD compulsions.

In a prayer accredited to Dr Johnson from 1766 he wrote ‘O God, grant me repentance, grant me reformation. Grant that I may be no longer disturbed with doubts and harassed with vain terrors.’ which of course could be making clear reference to unwanted intrusive thoughts (obsessions).

In his 1759 book Rasselas, Prince of Abyssinia, Jonson had the philosopher Imlac say to Rasselas, “Disorders of the intellect happen much more often than superficial observers will easily believe. Perhaps, if we speak with rigorous exactness, no human mind is in its right state. There is no man whose imagination does not sometimes predominate over this reason, who can regulate his attention wholly by his will, and whose ideas will come and go at his command. No man will be found in whose mind airy notions do not sometimes tyrannise, and force him to hope or fear beyond the limits of sober probability. All power of fancy over reason is a degree of insanity; but while this power is such as we can control and repress, it is not visible to others, nor considered as any deprivation of the mental faculties: It is not pronounced madness but when it comes ungovernable, and apparently influences speech or action.”

This could well have been Johnson relaying the doubts and uncertainties that plagued  him, potentially due to OCD.