OCD-UK is now an established and experienced charity which has been at the forefront of supporting people with Obsessive-Compulsive Disorder for over a decade. In that time we've fortunately been supported by a great many people, particularly by our Honorary President and patrons who have helped raise the profile of OCD-UK.

The role of OCD-UK's Honorary President recognises a highly committed individual who has supported and made an exceptional and significant contribution to the charity over extended periods. 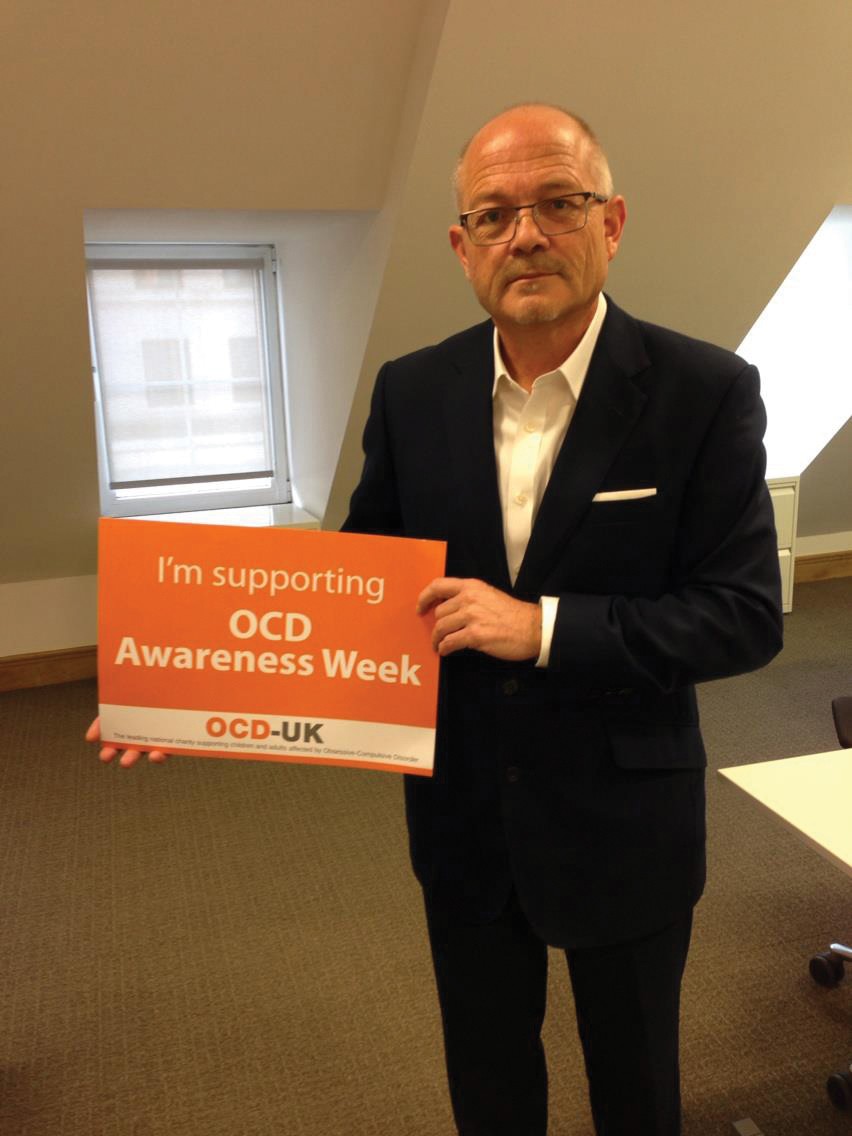 In 2012 we were delighted to announce that our co-founder, Steve Sharpe had accepted our invitation to become our first, and only, Honorary President.

Since the charity began, Steve has supported the charity both financially, and through his commitment to support the work of OCD-UK, seen here showing support for OCD Awareness Week inside his central London investment office.

Steve remains an active part of the charity in his mentoring of our Chief Executive, Ashley Fulwood.

Our patrons have also made exceptional and significant contributions over an extended period of time, and through their high profile work have helped raise the profile of OCD-UK.

The role of a patron is to aid and enhance the profile of OCD-UK in both the medical sector and the media, and work with us to raise awareness of Obsessive-Compulsive Disorder.

OCD-UK are delighted to work with high profile and pro-active patrons here in the UK, and overseas, a patron role we have named overseas ambassador working to raise our profile overseas.

Ian’s career as a writer and actor is a far cry from his childhood which was spent growing up on a farm in Flint, North Wales. At 19, he left home and moved to London to study at the Guildhall School of Music and Drama. After graduating in 1981, he started working as a street entertainer in Covent Garden, where his TV and theatre career took off soon after, including a stint playing 'Owen' on Coronation Street and more recently on the Sky hit, Tin Star.

In 2004 Ian co-wrote the ITV drama, Dirty Filthy Love, a story about a man struggling to understand his OCD.

In Ian’s own words. “I wanted to write about my experiences as an OCD sufferer-primarily to give people an insight into our strange little world! The film ‘Dirty Filthy Love’ was born out of that desire and I've been happy to talk about the film and my illness ever since. It has been unexpectedly quite liberating to be ‘out there’- sharing what were once my deepest darkest secrets. And, most importantly, without any shame or apology.”

Professor Salkovskis graduated in Clinical Psychology from the Institute of Psychiatry in 1979. During this period he worked on theoretical, experimental and clinical applications of cognitive theory particularly in the area of anxiety disorders and hypochondriasis (health anxiety).

Paul moved to the Institute of Psychiatry in 2000 to take up the post of Professor of Clinical Psychology and Applied Science and the role as Clinical Director in the Centre for Anxiety Disorders and Trauma (CADAT) where he stayed until 2010.

In 2010 Paul moved to the University of Bath, where he has set up a Clinical Psychology training course and specialist OCD treatment service.

Earlier this year, Paul moved to the University of Oxford as the new Director of the Oxford Institute of Clinical Psychology Training. 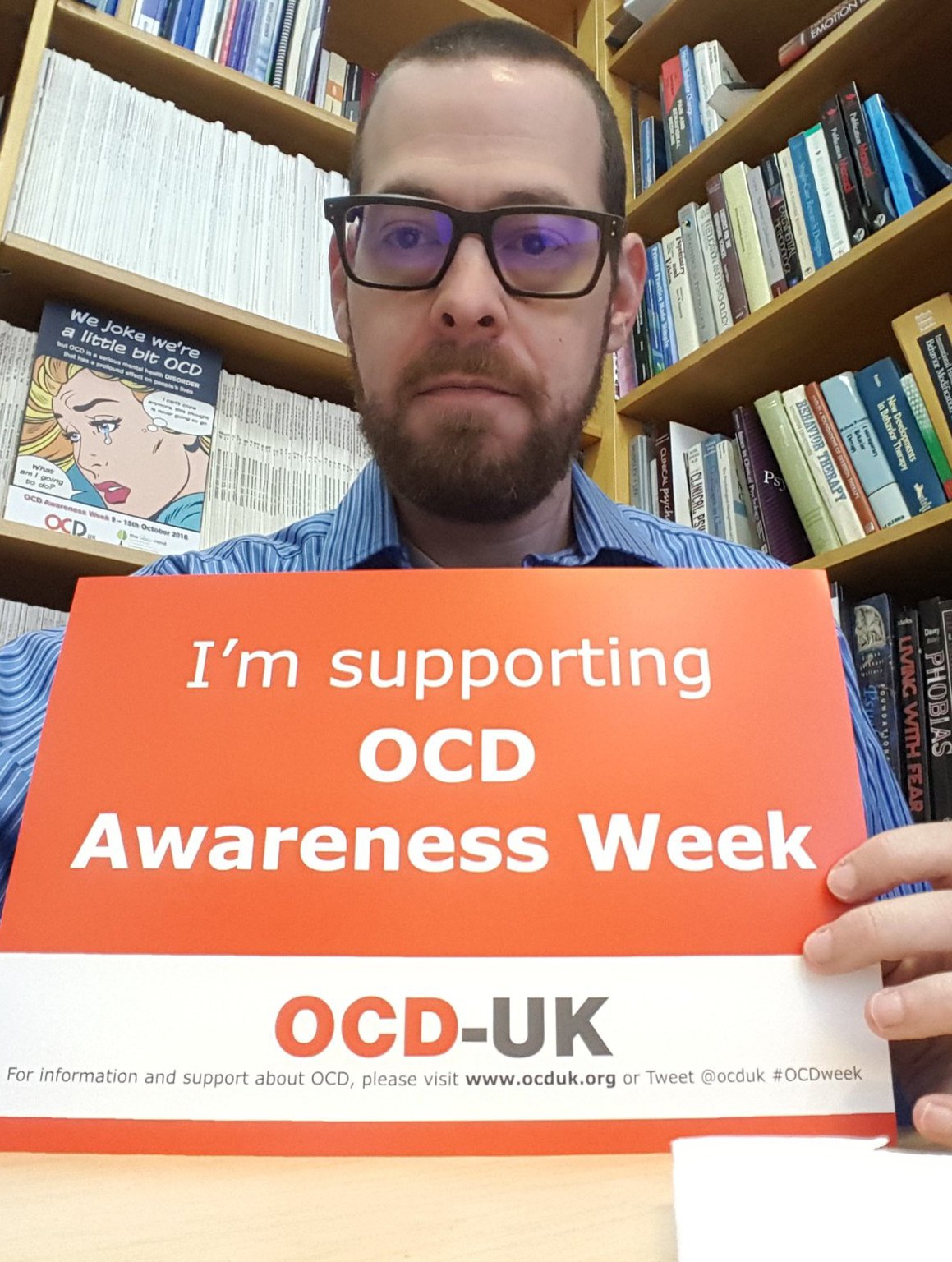 Dr Adam Radomsky is Professor of Psychology at Concordia University in Montreal, Canada and Editor-In-Chief of the Journal of Behavior Therapy and Experimental Psychiatry.

He joined Concordia University in 2001 after the completion of his Ph.D. in clinical psychology at the University of British Columbia and a fellowship at Harvard Medical School / Massachusetts General Hospital.

Adam is the Director of the Anxiety and Obsessive-Compulsive Disorders Laboratory.

His research investigates cognitive, behavioural and emotional aspects of OCD and a number of other anxiety disorders, as well as ways to enhance the effectiveness and acceptability of cognitive-behaviour therapy (CBT) for anxiety disorders and related problems.

In his clinical practice he specialises in Cognitive Behaviour Therapy (CBT) for adult OCD and other anxiety disorders.

We remain indebted to Adam, Ian, Paul and Steve for their continued support. On behalf of everyone involved with OCD-UK, we thank them for all that they do for people affected by OCD.