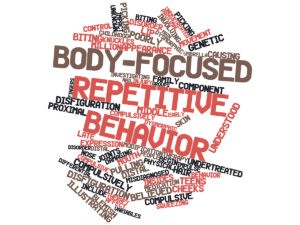 Skin Picking Disorder is frequently linked to Obsessive-Compulsive Disorder, partly because of the compulsive similarities between the two which may be why Excoriation Disorder, to give it is formal name, is actually listed as a sub-category in both the International Classification of Diseases (ICD) and the Diagnostic and Statistical Manual of Mental Disorders (DSM) clinical classification manuals under the main heading of Obsessive Compulsive and Related Disorders. Whilst there are compulsive similarities between OCD and skin picking disorder, there are also some significant differences which may be helpful to understand. But first let’s look at what Skin Picking Disorder actually is.

Also known has Dermatillomania or excoriation disorder, it is listed in the ICD diagnostic manual as a body-focused repetitive behaviour. Skin picking disorder is where you can’t stop picking at your own skin. Whilst most people pick at their skin occasionally, you may have skin picking disorder if you:

Of course, if you’re affected by skin picking in any capacity, even if it’s not exactly like what is described, we encourage you to seek out medical advice and assessment from a trained mental health professional via your GP.

The most common areas of the body that are picked at are the face and arms, although individuals may also pick at skin irregularities such as moles, freckles, spots or previous picking scars to try to attempt to smooth them out or perfect them. Most individuals will pick with their fingernails, although many use tweezers or other objects like scissors. In addition to skin picking there may be skin rubbing, squeezing or biting.

It is thought that those with excoriation disorder and skin picking problems often also have OCD, and for some this may be the case.  But is skin picking  the same as OCD?

Is Skin Picking the same as OCD?

In the DSM it is actually listed (rightly or wrongly) within a new category created called ‘Obsessive Compulsive Disorder and Related Disorders’, but not within Obsessive-Compulsive Disorder itself. In the ICD diagnostic manual it is listed as a body-focused repetitive behaviour similar to repetitive hair pulling disorder (trichotillomania), which is perhaps more accurate.

Whereas OCD is considered an anxiety disorder, arguably skin picking is more of an impulse control disorder. So whilst there are some compulsive and ritualistic similarities between the two there are also important differences. Primarily, OCD is driven by unwanted intrusive thoughts (the obsessions), for example fears of bad things happening where the compulsions are carried out in an attempt to prevent bad things happening. Whereas skin picking is characterised primarily by body-focused repetitive behaviour (skin picking) to reduce tension/stress, rather than being initiated by an unwanted intrusive thought.

There are many other differences too:

Treating Skin Picking
The treatments for skin picking are very similar to those for OCD, with the treatment found to be the most effective being a talking therapy called Cognitive Behavioural Therapy (CBT). Some people find they also need the additional support of anti-depressant medications to help them through the therapy which will usually be a form of anti-depressant SSRI (Selective Serotonin Re-uptake Inhibitor) medications.

There are of course some things you can do to help yourself whilst waiting for talking therapy, for example: