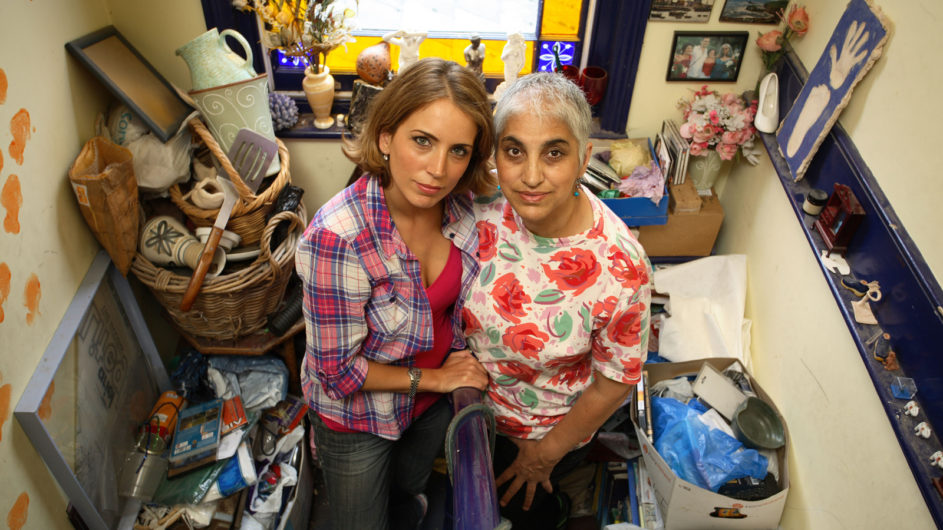 In recent years Hoarding disorder has received significant TV coverage, arguably more so than OCD, in part because of the seemingly shocking conditions that those with hoarding disorder live in. Whilst too many of these programmes focus entirely on the shock factor, some, like the BBC’s ‘My Hoarder Mum and Me‘ featuring TV presenter Jasmine Harmin (pictured above) and subsequently ‘Britain’s Biggest Hoarders‘, both of which went out on BBC1, focused on the psychological aspect of the problem, the latter featuring our own patron Professor Paul Salkovskis. Additionally, in 2011  Channel 4 broadcast ‘Obsessive Compulsive Hoarder‘, which had a more person centred focus on the condition focusing on one man’s struggles with the condition  (pictured below).

But what is Hoarding Disorder and is it OCD?

Hoarding Disorder is a condition where a person struggles to discard useless or worn out possessions, acquires an excessive number of items and stores them, usually in a chaotic manner resulting in unmanageable clutter. The items are nearly always of little or no monetary value, although some individuals collect and save large numbers of valuable items, often found in piles mixed with other less valuable items. The person will frequently have emotional attachment to all of the items, regardless of monetary value.

Long considered to be a form of Obsessive-Compulsive Disorder, hoarding disorder was probably correctly reclassified in the 2013 publication of Diagnostic and Statistical Manual of Mental Disorders (DSM-5) as a condition in its own right.It is somewhat complicated by the fact that some people with Obsessive-Compulsive Disorder hoard for very specific obsessive worries/fears, so it is important that health professionals correctly assess if a person’s hoarding problem is because of OCD, or as a result of hoarding disorder. The DSM-5 specifies that hoarding disorder would not be diagnosed as hoarding (but OCD) if:

The hoarding is not better explained by the symptoms of another mental disorder (e.g., obsessions in obsessive-compulsive disorder)

One reason why it was important to ensure that those with hoarding problems were correctly assessed and diagnosed, was because they responded differently compared to people with other types of OCD, they were less willing to accept that they had a problem and were less responsive to treatment, more research was needed. As a result,  there is now significant evidence to suggest that in many cases hoarding disorder is a separate condition to OCD.

Hoarding disorder can be challenging to treat, because many people who hoard have little awareness of how it impacts on their life or on the lives of others, and are reluctant to seek help because they feel extremely ashamed, humiliated or guilty about their problem.

Hoarding Disorder is considered to be a significant problem if:

It’s really important to encourage a person who is hoarding to seek help, as their difficulties discarding objects can not only cause problems around the house, but also loneliness and other mental health problems, the clutter can also pose a health and safety risk if not tackled.

As with OCD, we still don’t fully understand the reasons why someone begins hoarding. It can be a symptom of another condition such as severe depression, in other cases hoarding is a condition in itself and often associated with self-neglect with the person more likely to:

How common is it?
It’s estimated that between 2% and 6% of adults in the US and Europe may have symptoms of hoarding disorder. Whilst symptoms will impact on both males and females, it’s frequently seen more in males than females, although more females present in clinical samples. Hoarding problems can be a problem at any age, but is seen more frequently in older adults (55-94 years of age). In general, it’s believed that hoarding problems first emerge in the teens and start interfering with life during the mid 20’s, becoming a significant problem by the mid 30’s. It’s suggested that the severity of hoarding problems increases with every decade of life.

People with hoarding disorder can hoard a range of items or just hoard certain types of items, often with little monetary value. Items that are often hoarded include: 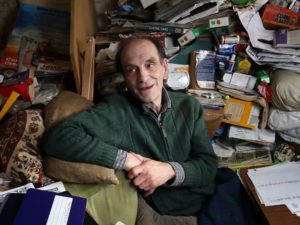 Hoarding Disorder can be a problem for several reasons. It can take over the person’s life, making it very difficult for them to get around their house. It can cause their work performance, personal hygiene and relationships to suffer. It can make cleaning very difficult, leading to unhygienic conditions and encouraging rodent or insect infestations. It can also lead to increased fire risk and trips and falls, making it especially difficult for older adults to get back up.

The person hoarding is usually reluctant or unable to have visitors, not even allowing tradesmen in to carry out essential repairs, which can cause isolation and loneliness and lead to a loss of essential utilities.

If you believe a family member or someone you know has hoarding disorder then encourage them to seek help through a trained health professional. Unfortunately one of the biggest challenges family members have is helping their loved one  accept and acknowledge they have a problem that needs addressing. This may not be easy, but it’s important to remain patient and sensitive about the issue, even when faced with reluctance to acknowledge it, or accept change,  and to continue over time (weeks and months) to gently emphasise your concerns for their health and well-being and help them understand that there’s a better way to live and they don’t need to be embarrassed.

Reassure them that nobody is going to go into their home and throw everything out and that initially they’re just going to have a chat with a GP to see what can be done and what support is available to empower them to begin the process of decluttering.

Treating Hoarding Disorder
It’s not easy to treat hoarding disorder, even when the person is prepared to seek help, but if the person is willing to seek and accept help, then treatment can be effective.

The treatments for Hoarding Disorder are very similar to those for OCD, with the treatment found to be the most effective being a talking therapy called Cognitive Behavioural Therapy (CBT). Some people find they also need the additional support of anti-depressant medications to help them cope with the stress and anxiety of the condition, usually a form of anti-depressant SSRI (Selective Serotonin Re-uptake Inhibitor) medication.

CBT will be combined with practical tasks and a plan to work on the hoarding problem. It’s important that the person takes responsibility for clearing the clutter from their home, rather than leaving it to others to make decisions. The goal is to improve the person’s decision-making and organisational skills, help them overcome urges to save, and ultimately clear the clutter, room by room. The therapist can also help the person develop decision-making strategies, while identifying and challenging underlying beliefs that contribute to the hoarding problem.

At the end of treatment, the person may not have cleared all their clutter, but they will have gained a better understanding of their problem. They will have a plan to help them continue to build on their successes and avoid slipping back into their old ways.

There are of course some things you can to help yourself whilst waiting for talking therapy, for example:

There are some things family members should not do: