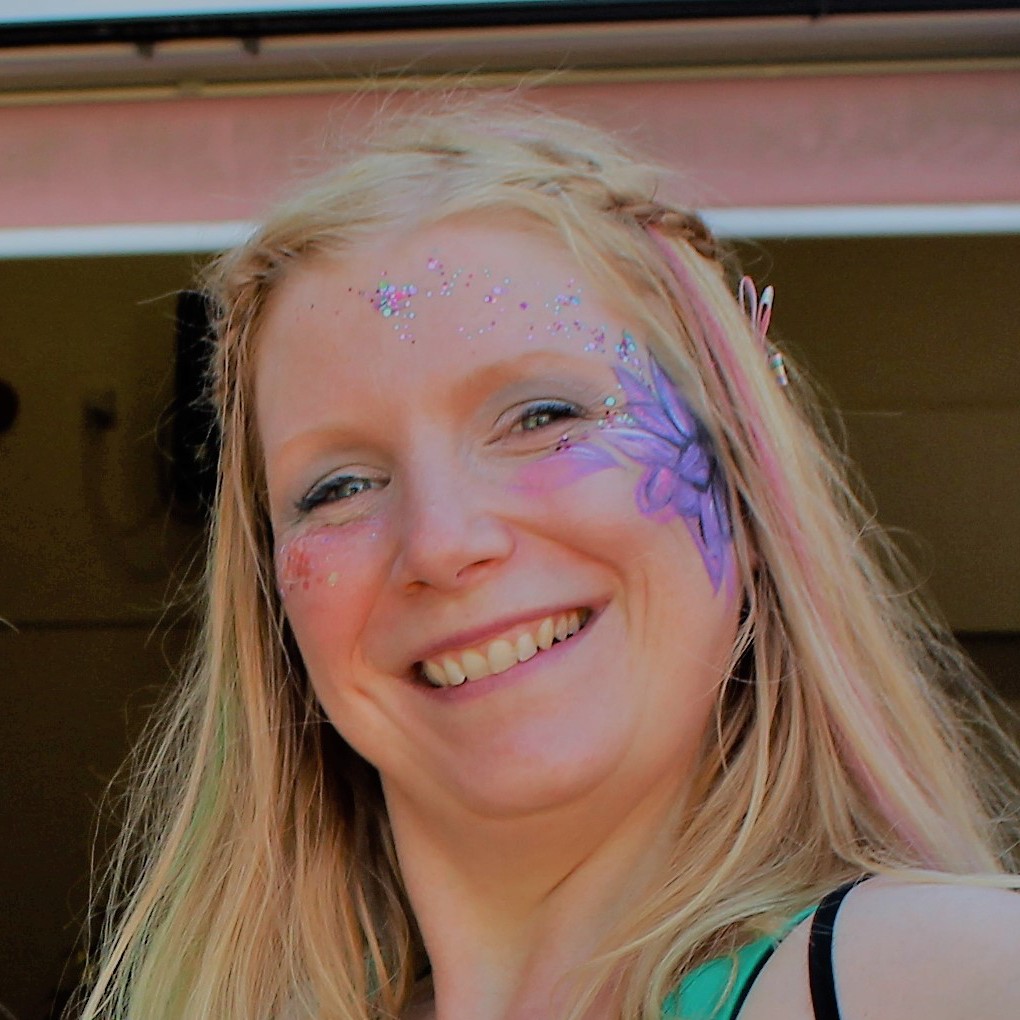 Facebook has come under a huge amount of flack recently… and maybe the tide of social media is changing?... however, for me, it has been a huge force for good. As a direct result of this website I have traced an aunt and two cousins I was estranged from, I have formed connections with old friends I never thought I would see again and I have been able to promote my own work effectively. However, for me the dark side of Facebook lies in the ‘memes’ and ‘quizzes’ that reinforce the common stereotype that OCD is just a humorous quirk;

And not to mention the vast number of ‘Obsessive Compulsive Christmas disorder’, ‘obsessive compulsive cat disorder’ quotes I have seen.

Most recently (last week in fact) one of these very posts popped up on my newsfeed because someone I knew had answered this burning question. Here is the meme shown on this page…. 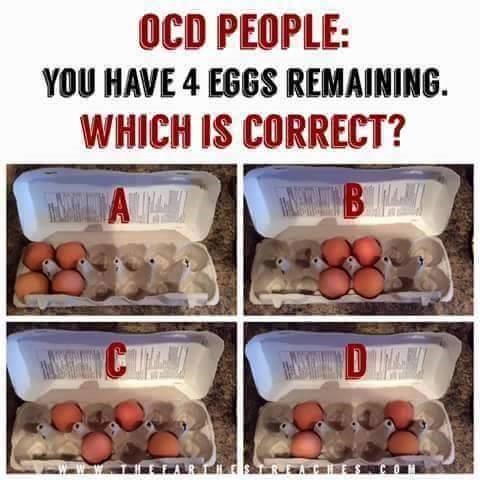 I can not sit back and allow serious, debilitating, life destroying conditions like OCD to be reduced to the position of eggs in a carton.

Now…. I love a good laugh; I adore the posts of cute laughing babies, squishy little kittens and I really love the raps written to classic 90’s hits about the truth of motherhood BUT I can not sit back and allow serious, debilitating, life destroying conditions like OCD to be reduced to the position of eggs in a carton. Firstly…. What on earth are ‘OCD PEOPLE’?

Secondly…. Over the past ten years I have met maybe two hundred diagnosed sufferers and I am confident that most (if not all!) of them are NOT obsessively concerned about the position of eggs in a tray.

Thirdly, would we find it acceptable to make such a joke out of cancer or AIDS for example? With this force in my mind I decided to speak out – to say what I thought and so amidst the comments of ‘A’, ‘C’, ‘definitely B you weirdos’ I posted the following and went to bed (it was late!) …..

“I am not sure how this relates to OCD! yet another piece of tiresome stereotyping ridiculing and making a mockery of a hugely debilitating condition. One day I really hope these posts won't be created or shared. Reinforcing these misconceptions of OCD all play a part in increasing the lack of understanding that we all need of conditions like this.”

I woke up the next morning and checked my Facebook (something I am embarrassed to say I often do almost immediately in the morning!). Over night I had received over 200 comments back…. I was initially shocked at the number of posts (200!!!! Do that many people really care enough to respond to me?!?!) but the general content of their comments was sadly not so surprising… You get the idea, some of which are shown below… just keyboard warrior babble!

Lighten up!
You are sad
Take a chill pill 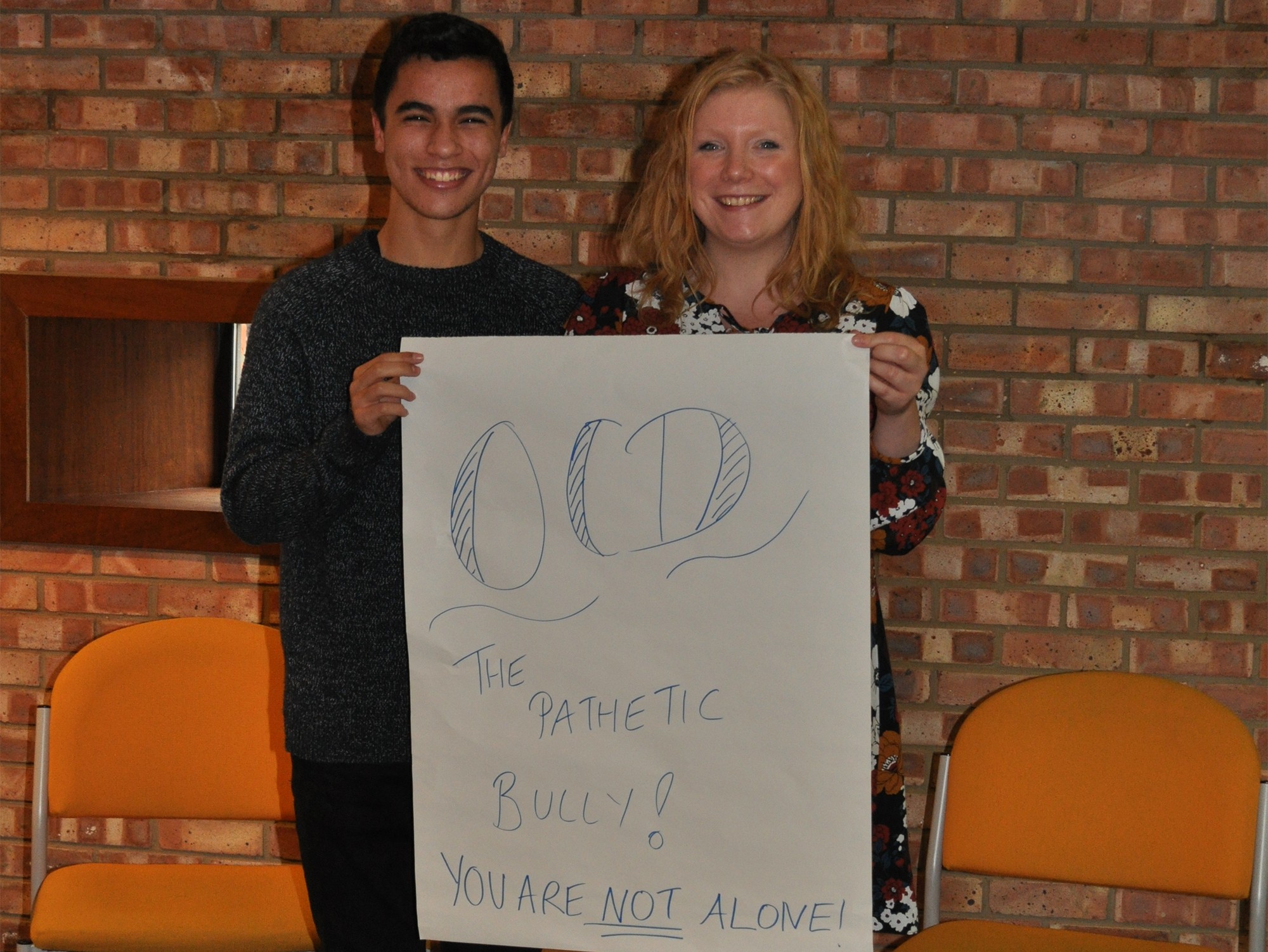 I turned off all notifications, so it wouldn’t be popping up on my phone all the time and looked back at the post a few times. I am very glad I did this as over the next few days the number of comments rocketed. It was now day four since I posted (why can I not say that without impersonating the Big Brother voice over) and my one little comment has received 900 responses. I struggle to believe that this is the case and am not sure why this struck such a nerve with so many. What is sad is that most of these posts are ill-informed and negative. Some are also a bit more troll like:

Hope you are getting therapy, you are clearly very ill.

I also had comments suggesting my mum must have had ‘scrambled her own eggs’ to have ended up with me and someone even wishing OCD and all its ills on me!

Yes, these are nasty, BUT I am aware that the internet is rather like road rage and that these comments however ‘personal’ are not really aimed at me but rather the need to jump on a band wagon and get some ‘entertainment’ out of clubbing together against someone. They don’t know me (the posts suggesting I need to be more creative and need to get a sense of humour are evidence enough of that!). However, in amongst those comments were literally hundreds that disturbed and frustrated me more. Comments like …

I’m a bit OCD and this doesn’t bother me.
There are two types of OCD love…. Chill out!
OMG people like you are why real people have a hard time joking around anymore I'm a bit O.C.D and love this.
You have no idea what you are talking about. I am OCD, and this makes perfect sense.
I have OCD, I think it's funny. I spend A lot of time straightening pictures, pillows, furniture, objects. Makes for a perfect look.lol

They are victim to the ignorance of the public perception and they are feeding it.

I genuinely thought we were getting somewhere and that the truth of OCD was now very much in the public eye. However, according to this post and the backlash that followed it really is not.

How can someone who says they have this condition think it is reasonable to ridicule it as much as it is? My thought is because they don’t, because they are victim to the ignorance of the public perception and they are feeding it.

Over the time that OCD has been such a major part of my life I have also met many, many, many sufferers who have told me just how long it has taken them to get help; how they spent years secretly completing compulsions rather than seeking support.

Why is it that OCD has become the condition of shame? Is it because people are so hideously embarrassed by their own behaviour and so sickened by their thoughts that they would rather live with the pain than seek support? OR is it because they genuinely think that OCD is just about organising eggs, making sure your food labels face out and do not know that the hell they are experiencing is OCD and that it IS this horrific. Whichever it is IT IS NOT RIGHT. I have even more tragically read stories of sufferers who have ended their own lives rather than seek support for what they are going through.

You see, I am very fearful that memes like the egg one, online quizzes testing your need for symmetry in relation to OCD, TV programmes making freak shows out of compulsive cleaning as a result of OCD, crap merchandise stating rubbish like ‘Obsessive Compulsive beer drinking disorder’ are all feeding the beast that is SHAME – why would someone want to seek support for a condition that is mocked everywhere they turn?

Or maybe it is worse than this…

There are certainly people out there RIGHT NOW driving around in petrified fear that they have hit a person with their car because they ‘thought it’, or stuck tapping a railing till it feels right and they are sure their partner/child/father will be ok because they tapped it ten times with thirty second intervals, and that these poor, poor people DO NOT KNOW this is a mental health condition, that they can get help and that this CAN BE SORTED.

So, in answer to the trolls who are repeatedly asking me to ‘get a life’ and ‘find a sense of humour’ I will say this…  I have a great sense of humour and a truly fantastic life my comments are not a reflection of any ‘issue’ with my ability to laugh at jokes. My beef with these posts is far more about how it is not allowing the TRUTH of OCD a way out and that there are sufferers out there RIGHT NOW who do not realise what it is they are going through.

I will continue to reflect and then react to every piece of misinformed OCD related nonsense that I see and for the sake of those out there with OCD in desperate fear and without the correct knowledge of what is happening to them I hope you reading this will too. We can beat this. We can change the public perception and we can destroy this ignorance. I am with you!

We can beat this. We can change the public perception and we can destroy this ignorance.